Sports Bettings Kiosks But Not in Vegas

Originally published and written for US Bets. Republished with permission. 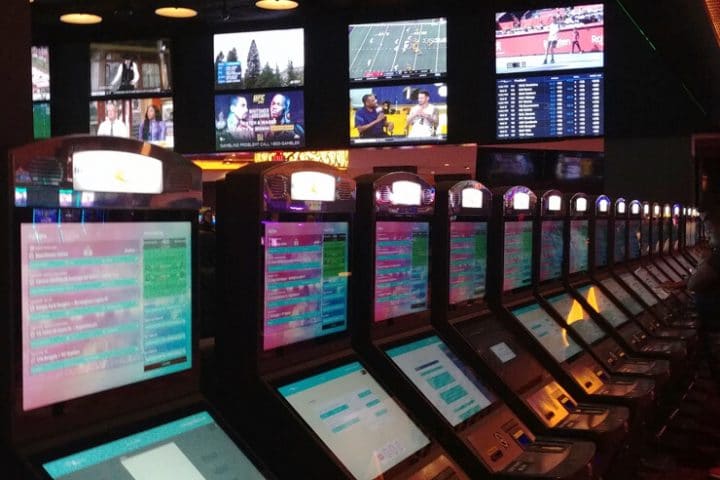 Rivers Casino in Pittsburgh opened its temporary sportsbook in December 2018 with six self-serve betting kiosks, a feature that had been rarely seen in the large, glitzy Las Vegas casinos patrons might have visited. For customers, there was a sharp learning curve.

He was speaking a few steps away from a row of 27 Kambi betting kiosks that had just been fully occupied during much of a September football weekend. Six more sports betting kiosks are scattered in other parts of the casino.

The Rivers’ emphasis on the technological alternative to betting windows, with their human, conversational ticket writers, may be out of the norm from what’s traditional in Nevada, but it’s part of a national trend as state after state legalizes sports betting and new sites open.

A dozen kiosks is common, but some have many more

Whether a small casino in Indiana, a mid-sized one in Mississippi, or a large operator in New Jersey, it is common to have anywhere from eight to 20 self-service kiosks in operations that have opened in the past 18 months. Operators say they reduce lines, speed things along, allow bets 24/7, enable in-game wagering, and appeal to younger bettors accustomed to doing everything in life digitally.

Self-serve kiosks, after all, have increasingly insinuated themselves during the 21st century, whether at airports, hotels, fast-food restaurants, convenience stores, health care settings, or elsewhere. They have for years been a part of casino operations relating to player loyalty programs, and the ever-expanding sports betting world is catching on.

Pennsylvania’s casinos may be bigger into the alternative than anyone. Parx Casino in suburban Philadelphia has 18 kiosks in its recently upgraded sportsbook, and Philadelphia’s SugarHouse Casino is expanding its number of kiosks from 12 to 22 in a new sportsbook about to open.

And much smaller Presque Isle Downs and Casino in suburban Erie, Pa., has 50 of them spread around the casino.

“The guests love it,” said Presque Isle’s general manager, Kevin O’Sullivan, estimating about 95% of bets placed at the Churchill Downs Inc.-owned property are by kiosk.

For first-time users, he said, “it only takes one of us to run through the screens for a minute or two, and they take it from there. The kiosks are definitely king … We’ve got them very well spread out, with locations where a person can just pop in quickly and place his bet so as not to tie up the ones in the sportsbook area.”

The relatively small William Hill sportsbook locations throughout Nevada have commonly made use of kiosks for years, but in the more opulent sportsbooks on the Las Vegas Strip and elsewhere, the self-serve devices are creeping in only a few at a time.

Charles Cohen, IGT PlayDigital vice president of sports betting, says the explanation lies in the longtime habits in the only state where sports wagers have historically been legal.

“The reality is it’s about the culture and style of experience that people associate with Las Vegas sports betting that makes it more of a personal, over-the-counter experience,” Cohen said. “The kind of training and expertise that ticket writers have at the windows there is very high, because they expect to have conversations with customers about the bets they’re placing.

“These guys are experts. There’s a certain social environment to the sportsbook where ticket writers are almost like hosts, and so the experience of walking into a sportsbook in Las Vegas is defined by that personal interaction.”

That’s a point agreed on by Derek Stevens, owner of the Golden Gate and D Las Vegas casinos and a large sports bettor himself. His two properties have added a total of nine betting kiosks in the past year, though they’re still seldom used compared to betting windows.

“Initially, the amount of wagering taking place on the kiosks is very modest,” he said. “It is certainly not anything similar to what I’ve read or seen on the East Coast. I think there’s an element in Las Vegas where customers are more accustomed to the windows, more accustomed to asking for information from ticket writers. From our perspective, it’s a great opportunity to provide great customer service and interact with the customer.”

Stevens is in the process of developing the Circa casino in Las Vegas with a mammoth sportsbook as a focal point, and “I’m certainly going to have kiosks — the only question is how many.”

Big bettors better off at the window

There’s one other key distinction in the Las Vegas sports betting world: the more customary large wagers placed there. Due to regulatory concerns, primarily related to money laundering, operators set limits on how much can be wagered on kiosks – such as a $3,000 maximum win through any kiosk bet at Pittsburgh’s Rivers.

Also, Cohen noted, large bettors can get slowed down instead of speeded up by kiosk use.

“People don’t want to stand there for five minutes feeding in bills to make a bet,” he said.

He said hundreds of IGT betting kiosks are in nine states, and casinos typically want a mix of kiosks and sports betting windows, with the balance varying depending on the nature of the casino.

“When you add kiosks into the environment, your volume of wagers goes up,” he said. “However, you can max it out, getting to the point where you have so many kiosks that most of the time they’re not being used, and it doesn’t have an incremental benefit.

“On a big game day, though, it’s different, when you’ve got a small period of time, a couple of hours, where 80% of the wagering is going to happen. You absolutely need to make sure people can get their bet down quickly.”

IGT is among a number of firms that are increasingly involved in providing the software platforms for sports betting kiosks in a big way, with Kambi, SB Tech, Stadium Technology Group, SG Digital, and others profiting from new business as legalization expands state by state.

In the case of IGT, it customarily contracts with a casino operator that then also partners with a sports odds provider, because IGT does not have a U.S. odds-setting operation. Kambi, meanwhile, provides both odds and kiosks for casinos in Pennsylvania, New Jersey, New York, and elsewhere.

Max Bichsel, U.S. director for Kambi, said the kiosks have for years been a popular mechanism for placing sports bets around the world, depending on the country, and it was just a matter of time and legalization before they became common in the U.S.

Kambi has hundreds of the kiosks placed in different states, and on average they represent 80% of the retail bets handled by those casinos, Bichsel said. The average size of the bet is smaller, though.

“Your high-value player with tens of thousands of dollars is going to the window — if you’re betting hundreds of dollars you’ll go to the kiosks,” he said. “There’s lots more volume on the kiosk but larger average handle over the counter.”

Though Bichsel said kiosks will never eliminate the need for or value of ticket writers, it is also customary for sportsbook counters to close down late at night, once the key televised games end. The casinos never shut their doors to customers, however, including potential sport bettors.

“A kiosk can be 24/7 and someone can still get a bet down,” he said. “There’s a lot of benefits for the customer.”

One of the benefits identified by Rusty Johnson of Fort Collins, Ky., visiting the Rivers Casino before his Cincinnati Bengals took on the Steelers at nearby Heinz Field last Monday, was just how many betting options he could see on the kiosk compared to the odds boards above the betting counters.

In that respect, scrolling through the kiosk menu is not much different from what players experience in states like New Jersey and Pennsylvania with legalized online/app sports betting. So Johnson got a small bet down on Bengals receiver Tyler Boyd’s number of catches, which would have not been a clear wager to him at the window, unless he knew to ask.

“There’s a lot of stuff on there you can look at and take your time, a lot of different options,” Johnson said, though he acknowledged he also had to ask for help from Rivers Casino staff the first time he used the machine.

Barnabei said the casino has up to three “ambassadors” available during busy times to assist customers at the more than two dozen kiosks and speed things along. By providing that service, he said, the sportsbook has actually expanded its number of employees due to kiosks, rather than reducing them.

The Rivers has already expanded its number of kiosks three times since opening, yet it still has nowhere as many as smaller Presque Isle. As to whether it will need to keep increasing — the kiosks each cost “about 8 grand,” according to Barnabei — it will all depend on demand.

“That would be a great problem to have,” said Bill Keena, the casino’s general manager.

Legal U.S. Sports Betting: Which States Are Next?

Gary Rotstein
Gary is a longtime journalist, having spent three decades covering gambling, state government, and other issues for the Pittsburgh Post-Gazette, in addition to stints as managing editor of the Bedford (Pa.) Gazette and as a reporter for United Press International and the Middletown (Conn.) Press. Contact Gary at [email protected]