Regarding appearance, Lollipop offers a design concept called Material Design, which is more dynamic and intelligent. The icons are simplified, it features bright colors and a tile-like feel, as well as a cleaner navigation system.

Android Lollipop also features interactive push notifications. The notification panel is being merged with the lock screen so users can see an overview of the most important information before they unlock their phone. A learning tool is also incorporated, which learns what users open or do not open and will prioritize the most relevant information deemed by the user.

NN4M also believes there are certain Android features that are underused.

The Groovik’s Cube, featured in the Beyond Rubik’s

Cube traveling exhibit, is an interactive Rubik’s Cube that visitors can solve from the museum or from anywhere in the world via the web. The Groovik’s Cube, the largest functional Rubik’s Cube (26 feet tall), was constructed by Mike Tyka and first displayed at the 2009 Burning Man festival in Nevada. Following its popularity there, it is now being featured at Liberty Science Center in New Jersey. Ideum worked closely with Liberty Science Center to improve the interactive kiosks in the exhibit and build a new web and mobile application that allows visitors to solve the giant Rubik’s Cube.

can be solved through different interactive platforms. During Liberty Science Center’s visiting hours museum visitors can use one of three touch screen kiosks situated around the cube. Each screen has a model of the cube which they can manipulate, the moves made on the kiosks are mirrored on the Groovik’s Cube. Up to three visitors can play at any time, all collaborating to meet the same goal of solving the Groovik’s Cube.

One of the many unique features of Groovik’s Cube is that people can play with it from anywhere in the world after museum hours. Once Liberty Science Center is closed to the public, anyone can log on to their website to see a live video feed of the cube and use the web version of the 3D model to solve the cube.

Working off of the original Groovik’s Cube software, Ideum redesigned and enhanced the kiosks and created a mobile and web version which enables users to control the cube over the web. The web-based HTML5 application is fully responsive and works on a variety of iOS and Android-based devices.

The Groovik’s Cube exhibition is on display now at Liberty Science Center. You can play online games, see the cube live or control the the giant Groovik’s Cube via web or mobile devices at PlayGrooviks.org. 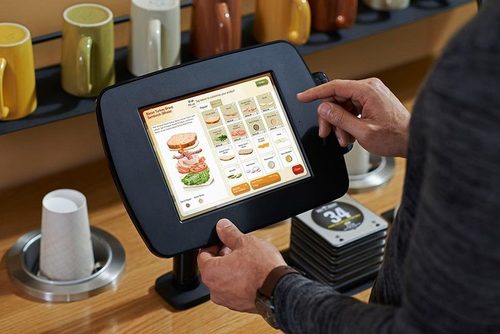 In the new system, customers order and sit, and Panera’s servers bring their orders to them

Nice graphic of new store layout and flow for traffic.

o 7/30 Webinar: Innovating with RFID in a Time of Change Thursday, July 30, 1:00PM EST Learn how RFID can fuel business transformation and help reveal opportunities hidden in plain sight. Hear from Zebra’s industry experts on the ROI and impact of RFID on your business

o 08/13 Webinar: Innovating the Warehouse in a Time of Change Thursday, Aug 13, 1:00PM EST Explore how you can leverage new technology to help your operation gain greater levels of visibility through mobile technology, integrated with flexible robotic solutions, all while keeping workers safe.