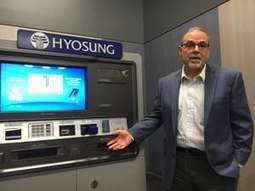 Nearly seven years ago, when NCR began leaving its home of more than a century, much of its talent remained rooted in Dayton.

The ATM business has two distinct segments said Nancy Daniels, company executive vice president and chief operating officer. There are the ATMs used in banks and the machines used in convenience stores, hotels and elsewhere.

There are far more of the latter machines used in places outside banks, she said. And even in an era of debit cards, the amount of cash in circulation keeps growing, she said.

“We have about 70 percent of that market,” said Daniels, an NCR veteran now working at Nautilus Hyosung’s Irving, Texas headquarters.