New draft changes went in 3/19/2021 – release is imminent of 1.1.2 updated. We thought it a good time to bring this back into focus for the self-service community.

What is Europe ADA

They are managed at ETSI

Are they the same as US ADA?

They share some identical influences such as WCAG but they are not the same. An update on the WCAG standard is the release of the working draft for WCAG 3.0. One of the goals of the U.S. Access Board is to “harmonize” the disparate standards into one standard. The European standards have been described by some as in certain cases more descriptive in effect. By contrast the US standards are sometimes described as more prescriptive.  There are many areas that though that they directly harmonize with each other.

No, however, they do have a section for Receipts and Transactions which has requirements.  It seems pretty clear that speech output is required to verify the transaction.

Throughout its rulemaking process to update its Section 508 Standards, the Board coordinated its work with the European Commission’s development of counterpart ICT accessibility standards.  In 2014, the European Commission adopted the “Accessibility requirements for public procurement of ICT products and services in Europe” (EN 301 549) which is available for use by European government officials as technical specifications or award criteria in public procurements of ICT products and services.  The Board has worked to ensure broad harmonization between its ICT requirements and the European Commission’s standards (as revised in 2015).

The language you use when describing the qualitative differences between the “European standards” and the “US Standards” appears to be more of an opinion, rather than fact-based.  Example:  “detailed outcomes and fuzzy requirement” versus “detailed requirements and fuzzy outcomes.” You may be better served by looking at some of the specific provisions in the two standards, EN 301 549 and the Revised 508 Standards (2017) and seeing how the technical requirements are addressed. While the language may differ, the standards still harmonize.  For example, both standards have requirements in their respective documents on Hardware.  The language used in each of the provisions is similar.  The EN text also provides “Notes”  which further explain the text of the provision.  Another factor you might consider when doing an evaluation between the two standards is the context in which they are drafted.  The U.S. 508 Standard is fairly focused on defining and addressing the accessibility features of ICT, with an intention of implementing this is procurements as well as operations.  The EN standards address ICT accessibility features AND also address services, such as “Relay Services requirements” in Chapter 13 “ICT providing relay or emergency service access”.

Where data connections used for input and output are provided, at least one of each type of connection shall conform to industry standard non-proprietary formats.

Where an ICT provides user input or output device connection points, the ICT shall provide at least one input and/or output connection that conforms to an industry standard non-proprietary format, directly or through the use of commercially available adapters.

NOTE 1: The intent of this requirement is to ensure compatibility with assistive technologies by requiring the use of standard connections on ICT.

NOTE 2: The word connection applies to both physical and wireless connections.

Example of new kiosk in Germany 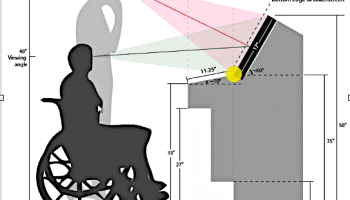 Regulatory Checklist Kiosks To assist companies in their due diligence for regulatory conformance the Kiosk Association has worked up a 14 point checklist that outlines the ADA, Accessibility as well as PCI considerations for self-service. Other standards such as UL also apply but for purposes of this document we are…