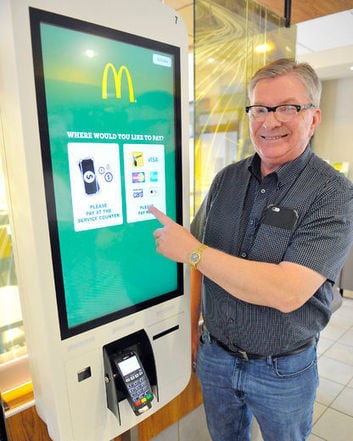 McDonalds kiosk is simply responding to competition from other chains that have offered “enhanced burgers,” said Hilda Fahey, a company representative who was in Simcoe to help with the changeover to the new services at the Queensway East restaurant.

“We have 35 different people we didn’t have before,” Maskell said on a Wednesday afternoon while preparing for an opening that night for the new services.

More people are needed in the kitchen, he explained, to service the customers out front.

McDonald’s also has added what it calls “guest experience leaders” – women and men in uniform who are in front of the counter helping people to their seats, delivering them food, or assisting them at the kiosk.

Mary Tout, who started doing the job last February, said part of her role includes letting customers about what’s going on in the area.

“People love the socialization,” she said. “They think because there’s a kiosk, they’re not going to be speaking to a person.”