See press release here. Phone Charging Kiosk Market Growth The phone charging market has experienced a double digit growth in the last 2 years and is growing even faster. DENVER, CO – 02 Aug, 2016 – Whether it is in a retail store such as Neiman Marcus, the airports, bars or the streets of New York the emerging… Read More »

December 2021 — Charging kiosks began as mobile phone charge kiosk but in late 2021 they have evolved to EV charging kiosks for automobiles. Adding charging stations to retail locations such as shopping (Kohls e.g.) to restaurant rapid charge have added a new dimension to the value of these units. Typically Google Maps will identify and prompt users… Read More »

The ‘solarbox’ scheme may pain some smartphone-eschewing old-timers. But at least London’s beloved phone boxes are still kind of being used to make calls, right? Source: www.mnn.com On Tottenham Court Road, a single démodé London phone booth dressed in the standard “currant red” has been painted over in green and outfitted with roof-mounted solar panels. Inside the… Read More »

The kiosks will display digital ads while travelers stop for a few minutes to charge their devices. Source: www.bizjournals.com

From integrated technologies and expanding payment options, to location awareness and personalization, we take a look at the top ten trends driving explosive growth in self-service. Source: vsr.edgl.com Summary of current areas of “booming self-service” by Vertical Systems Reseller

The US Patent & Trademark Office published a patent application from Samsung that reveals one of their latest inventions regarding a new display technology for charging wirelessly through a display panel and/or a wireless charging system. Our report presents you with four of Samsung’s charging application examples over and above the tablet case that you can see presented… Read More »

Brightbox Inc., a global platform provider of networked mobile device recharging and engagement solutions, announced it teamed with Panasonic to keep the throngs attending this past weekend’s VidCon 2015 charged and engaged.

Retailers and mall operators aren’t the only ones able to benefit from this next generation of charging kiosk. Casinos, stadiums, and any brand with a loyalty or membership program are prime targets for this new technology. The kiosks can also help drive new loyalty sign-ups. If a customer is not an existing loyalty member, the touchscreen will direct them to the nearest on-site location where they can sign up to become a member, and then get a free phone charge. 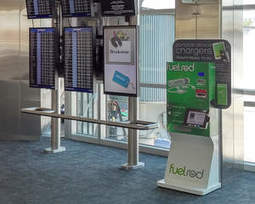 SAN DIEGO, CA–(Marketwired – Jun 1, 2016) – Tricopian, LLC, a San Diego, California-based developer of the innovative FuelRod mobile charging service for smartphones and tablets, announces that its FuelRod® “SwapBox™” kiosks are now deployed at Baltimore-Washington International Thurgood Marshall Airport (BWI). As one of the fastest-growing airports in th

Charging Kiosk News Visitors to Knoxville’s Market Square can change their devices for free with a new solar-powered charging kiosk installed by the Tennessee Valley Authority. Source: www.wate.com The kiosk is located next to the TVA fountain across from the square on Wall Avenue and can charge up to six mobile phones or tablets at a time with… Read More »

Calvin Klein’s Director of Marketing, Roland Figueredo who was in charge of the project says; “In the fast paced retail environment, we are trying to meet all of our customers’ needs. From the product we sell, to the shopping experience, we want the customer to feel special.”

He goes on to add: “We are also trying to bring a bit of modern technology and convenience into our stores and these charging kiosks gives us that opportunity.  We are able to give the customer a place to charge their phones, see some branded content and continue to shop…a win/win for the stores and the customer. Working with Veloxity has been a pleasure from day one. They were able to turn this around in a very short time frame and have provided excellent customer service throughout this project. I look forward to working with them in 2017 to expand these into more of our stores in North America.”

The Philadelphia-based company, which installs secure cell phone charging kiosks at a number of retail locations, wrapped a $4.1 million round of funding on June 16.

EVcharge Magazine – Terminals and Technology Magazine EV Charging Magazine. EV Charge is the world’s only print and digital magazine for electric vehicle charging infrastructure, terminals and technology EVcharge magazine is the only technical journal for manufacturers, integrators and deployers of EV charging terminals and technology. Published on a bi-monthly basis, EVcharge magazine reaches an audience of 15,000 qualified… Read More »