As posted on the Kiosk Association website Feb2021 Kiosk ADA 14 Point Checklist – Code of Practice General Areas of Discovery and Due Diligence for Review Initial Design Begin your initial design phase with full accessibility accommodated.  You can always do a cost/benefit analysis and compare later to a stripped-down unit with its inherent liability Hardware Spacing —… Read More »

ADA Kiosk Checklist from Code of Practice Current updated page located at the Kiosk Association KMA March 2021 —  It also includes 4 different images from US Access Board on different reach parameters and distances that need to be observed. To be sure this is only the top-level “first things first” list.  Suits are generally initiated by blind… Read More »

McDonald’s Kiosk Accessibility News In Brief Public announcement by McDonald’s they are intent on addressing accessibility AudioNav selected by McDonald’s More specific details on an implementation schedule, company-owned versus franchisees, new kiosk versus existing kiosks expected prior to NRF 2022 which at the KMA Booth 1606 Storm will be showing the latest in accessibility technology. Worth noting that… Read More »

Justice Department Files Statement of Interest in Lawsuit Regarding Self-Service Kiosks in Health Care Setting Editors Note: thanks to Nicky for spotting this early and sending it to me. This is interesting on several levels but the main one for us is that the lack of concierge or assistance is detailed. A variant of this for PCI regulations is the… Read More »

ADA Kiosk Access Webinar – Example Storm AudioNav The U.S. Access Board conducted a recent webinar with the focus being kiosks. Below are some of the more interesting areas. This webinar is part of a series showcasing “Best Practices in Federal Section 508 Implementation.” Other presentations can be viewed at: www.adaconferences.org and www.fedlink.org/allqual/resource-shared-webinars.cfm A best practice is a… Read More »

ADA Kiosk Update — ADA Legal Consequences See our Legal News for the latest developments in law. Original story — Article from TPGi (aka Vispero) on historical legal implications of non-compliance with accessibility. Predominantly it is a lack of accessibility for the blind which triggers the legal action and the plaintiffs checklist seems to be April 2021 Update… Read More »

ADA Kiosk News From Businesswire August 2021 August 18, 2021 03:39 PM Eastern Daylight Time DENVER–(BUSINESS WIRE)–KMA is pleased to confirm that Peter Jarvis has accepted a request to continue as Co-Chair of the Accessibility Committee. Working closely with Peter as Co-Chair will be Nicky Shaw of Storm Interface. “Thank you to Randy Amundson of FMA who previously served as… Read More » The next webinar in the Section 508 Best Practices Webinar Series will take placeSeptember 27 from 1:00 to 2:30 (ET) and will cover accessibility to electronic and information technology, assistive technologies, and reasonable accommodations.

The Section 508 Best Practices Webinar Series provides helpful information and best practices for federal agencies in meeting their obligations under Section 508 of the Rehabilitation Act which ensures access to electronic and information technology in the federal sector. This webinar series is made available by the Accessibility Community of Practice of the CIO Council in partnership with the U.S. Access Board.

ADA Kiosk – Updates for Kiosk Industry We have some updates for ADA and kiosks. Add-on for Verifone POS Tactile “bumps” Tax incentives for ADA (deductions and credits) US Access Board meeting for January ADA Working Group for Kiosk Industry Group.   #1 — New add-on for POS and ADA compliance from Taylor Stands.  Detachable POS with tether… Read More » 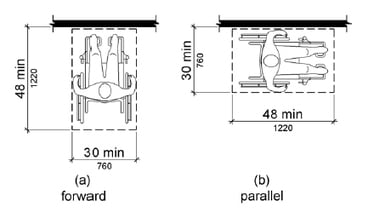 Sept 13, 2017 — The U.S. Access Board recently updated the 508 requirements for accessible ICT (information and communication technology) in the Federal space.  This is their “press release”. About the Update of the Section 508 Standards and Section 255 Guidelines for Information and Communication Technology On January 18, 2017, the U.S. Access Board published afinal rule updating accessibility requirements… Read More »

U.S. Access Board to Host Panel Discussions on Self-Service Transaction Machines (May 19)  The U.S. Access Board will host panel discussions on access to self-service  transaction machines (SSTMs), including point-of-sales machines and ticket kiosks, as part of its next virtual Board meeting on May 19 from 1:00 – 3:15 (ET). One panel will include representatives from advocacy organizations who will discuss usability issues and accessibility barriers. Another panel will address efforts by research and industry to improve access to SSTMs. The public is welcome to… Read More »

Voice response promises to add a new interactivity for self-service devices how do kiosks help people with speech needs? When we think of interactive kiosks, what typically comes to mind is the touch-enabled displays that are a nearly ubiquitous component of today’s self-service devices. Trained in part by the tap, pinch and swipe actions that are the main… Read More »

From the THEPACIELLOGROUP website and Matt Ater  — March 2020 Editors Note:  It is a fact that more than ever before companies are relying on the website to service customers.  But are all customers being served?  Liability for accessibility is the #1 concern for corporate websites. Let Vispero help guide you. JAWS Accessibility: Selecting the Correct Input Device… Read More »

Read full article at Paciello Group March 2020 Healthcare kiosks are, now more than ever, a valuable tool for serving more patients without the need for up close staff interaction. They can be used for checking in patients and gathering symptom information for efficient triage purposes. They can also be used to measure patient blood pressure or heart… Read More »

Storm-Interface News Link – Self Service Terminals with voice recording, voice recognition or speech command features are now deployed in public locations. However, this has raised concerns about privacy and led to calls for the government to review privacy regulations. The presence of any active (recording) microphone must be immediately obvious to anyone within recording range. It may… Read More » New York City’s public Wi-Fi kiosks aren’t sufficiently accessible to blind people, according to claims made in a lawsuit filed Thursday by attorneys representing advocates for the disabled.

The kiosks include Braille labels next to a 911 button and a headphone jack. The kiosk’s touch-screen tablet is also at a level so that those in a wheelchair are able to use it, according to a CityBridge spokesman.

Mindy Jacobsen, a 65-year-old Brooklyn resident, is one of three blind residents suing the city. Last week, Ms. Jacobsen, who teaches technology courses in Manhattan, said she plugged her headphones into a kiosk on Eighth Avenue, hoping to use it for directions. But the maps feature was on the touch screen, which Ms. Jacobsen couldn’t use.

A 911 call can only be placed when an on-screen prompt is pressed.

Thanks to Ben Wheeler for spotting this. I just heard about Arbys putting in new ADA devices for POS. After Walmart getting hammered I think everybody is reconsidering ADA.

From the new TPGi website Feb 2021 — The Paciello Group is now rebranded as TPG Interactive or TPGi.  TPGi is a division of Vispero.  We note that TPGi is one of the contributors to WCAG 3.0 and is the top tier in accessibility testing and guidance. With the proliferation of web and mobile ordering, accessibility is more… Read More »

WCAG 3.0 Working Draft Released by W3C Editors Note — With the non-negotiable requirements for web access for customers to order, the “website” has taken on even more importance and is now a critical component of company success. Getting sued for a lack of accessibility is not one of the outcomes you want.  Complicate matters with which platform… Read More »

Touchscreen-based self-service technology is changing the way we do business, but one of the key challenges to widespread adoption is finding a way to make that technology useable by everyone. Self-Service For All – ADA Kiosk By Richard Slawsky contributor Interactive touchscreens are quickly becoming a key player in the kiosk world. Businesses ranging from fast-casual restaurants to… Read More »

With the passing of the 41st president, it’s worth remembering what may be his signature achievement. Richard Slawsky is an Educator and freelance writer, specializing in the digital signage and kiosk industries.Louisville, Kentucky Area The death of former president George H.W. Bush Nov. 30 at age 94 prompted a host of reminiscing in the media. Bush’s passing, many wrote, was… Read More »

Since 1996 covering the self-service technology market