From The Source — thanks to Ross of Qwick Media for pointing this out!  Great post on assistive navigation for the blind using their mobile phones as intelligent cameras basically.

Navigating through Union Station can prove challenging to even the most resourceful traveler, let alone somebody who is blind or visually impaired. While sighted travelers rely on signage and visual cues, blind and partially sighted people often seek tactile pathways to guide them. Given that installing tactile pathways at Union Station’s is challenging due to the historic landmark status of the station, Metro was open to alternative wayfinding solutions.

Last year, NaviLens submitted an unsolicited proposal to test an innovative, audio wayfinding technology—via Metro’s Unsolicited Proposal (UP) process. The UP process unlocks innovation by allowing outside parties to submit concepts to Metro.

Review teams from across the agency evaluate the proposal, and if they determine there is financial and/or technical merit, the proposal moves forward. The UP process often leads to small scale pilots or proofs of concept so Metro can test concepts and emerging technologies. In this case, OEI and the Office of Civil Rights (OCR) reviewed the NaviLens technology and decided the proposal merited a proof of concept.

NaviLens was developed through a partnership between Mobile Vision Research Lab at the University of Alicante in Spain and the Spanish startup Neosistic. The technology consists of a set of colored pixelated tags (similar to QR codes) and an accompanying smartphone app. A user’s smartphone camera scans the surroundings for tags while the app recites the tag’s stored information. Each tag is strategically placed and individually programmed with wayfinding information including distance and direction to platforms, transit arrival and departure information, and ticket kiosks and restroom locations. The technology is powerful—a five-inch tag can be read from up to 39 feet away, in a 30th of a second, while the camera is in motion, and without even focusing.

This past October, Metro began testing NaviLens in Union Station. Tags were placed throughout Union Station, creating audio pathways to the B (Red), D (Purple), and L (Gold) Line platforms, Amtrak and Metrolink platforms, and Patsaouras Bus Plaza, and identifying ticket vending machines, fare gates, elevators, and emergency telephones. The pilot team included multiple Metro departments and other partners-  OEI, OCR, Metro’s Accessibility Advisory Committee (AAC), Metro’s General Services, Morlin Property Management, Amalgamated Transit Union and the British Royal National Institute of Blind People. Throughout the pilot, NaviLens has been praised by blind and visually impaired test users. “I would feel more comfortable traveling by myself if this was available everywhere” and “This feels similar to what sighted people can do, being able to see signage” were some of the comments Metro received from the test group.

The NaviLens technology is gaining traction. It is currently deployed at bus stops and metro stations of the Barcelona and Madrid transit systems, has been endorsed by the Britain’s Royal National Institute of Blind People (RNIB), and was recently studied as part of NYCMTA Accessible Station Lab pilot.

This isn’t the first wayfinding technology for blind and visually impaired people that Metro has piloted. Last spring, OCR conducted a pilot with Wayfindr, an audio navigation technology which pairs Bluetooth Low Energy (BLE) beacons with a smartphone app. As assistive technologies continue to evolve, Metro welcomes the development of aids that improve the autonomy of blind and visually impaired travelers in Union Station.

Want to explore yourself? Download the free NaviLens app and give it a try. We’d love to hear what you think.

In this station, over 100 NaviLens codes:
(1) Help the visually-impaired users to be more independent in unknow spaces,

(2) Guide all users indoors through virtual arrows in a very innovative Augmented Reality (AR) experience, without GPS or Bluetooth,

(4) And all of these features in 24 languages, breaking language barriers of all subway users.

It’s a revolution for indoor navigation where it’s not possible to use GPS or other computer-vision methods. 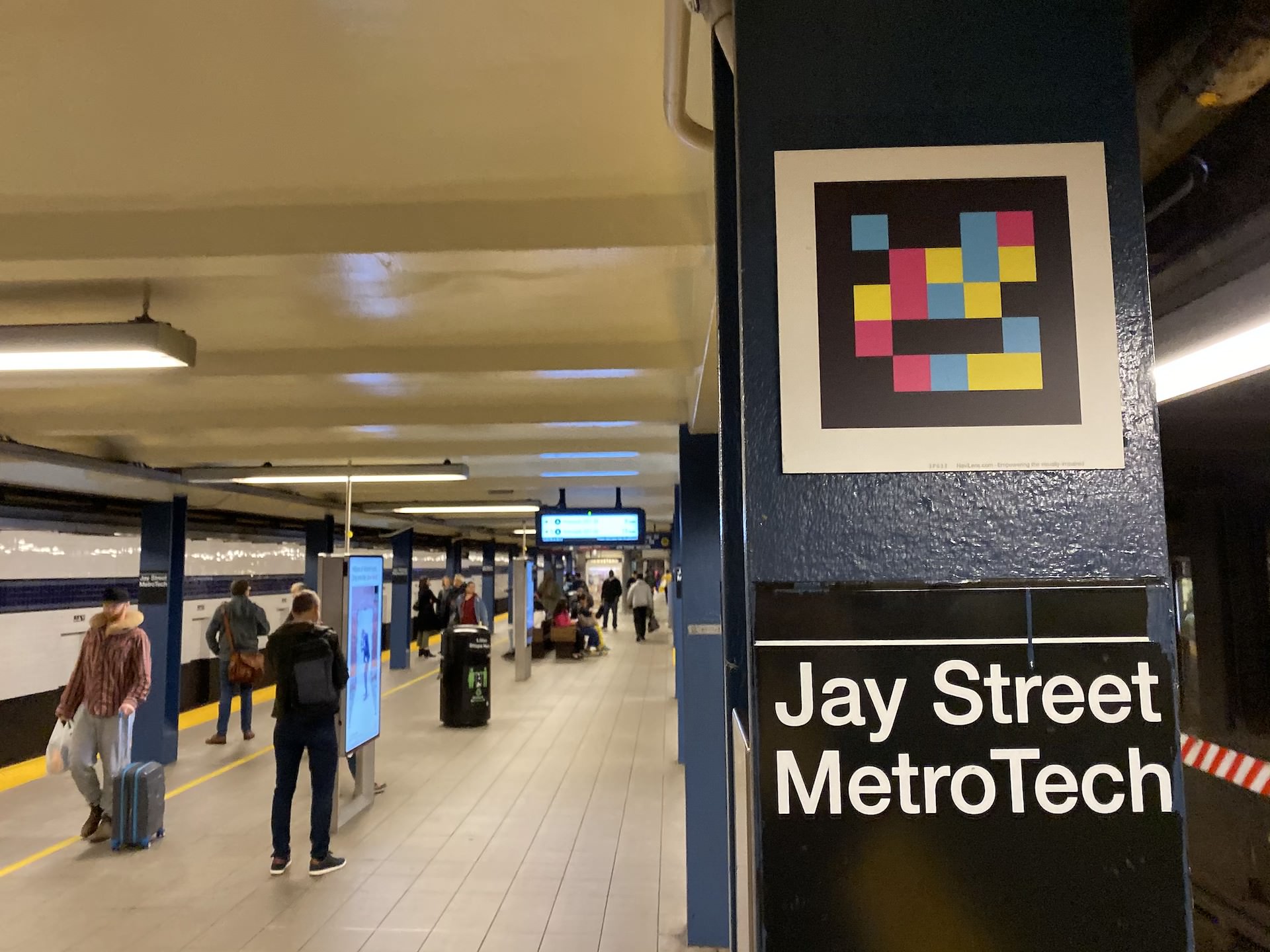 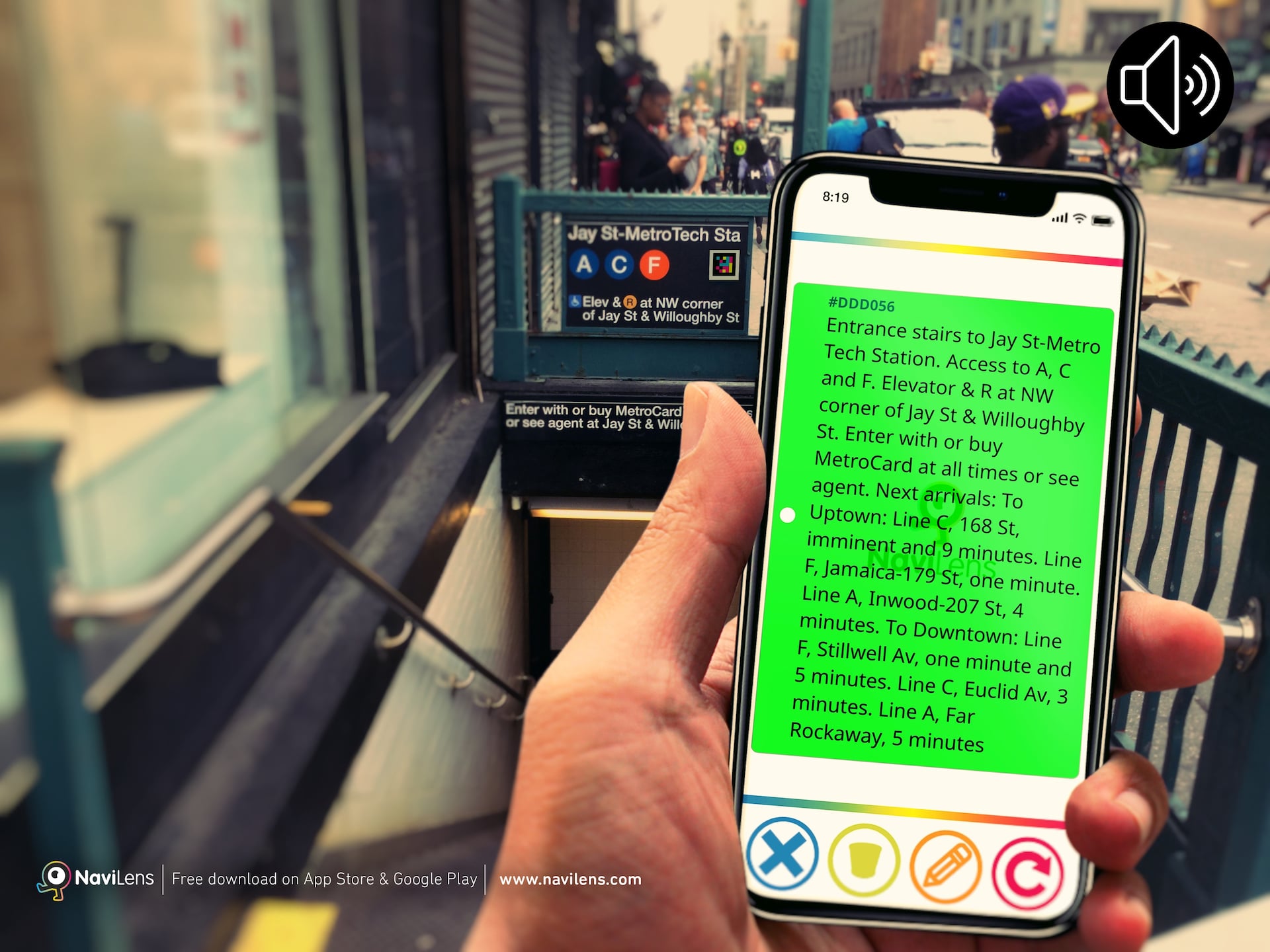 Audible information for visually-impaired users scanning the code far away. 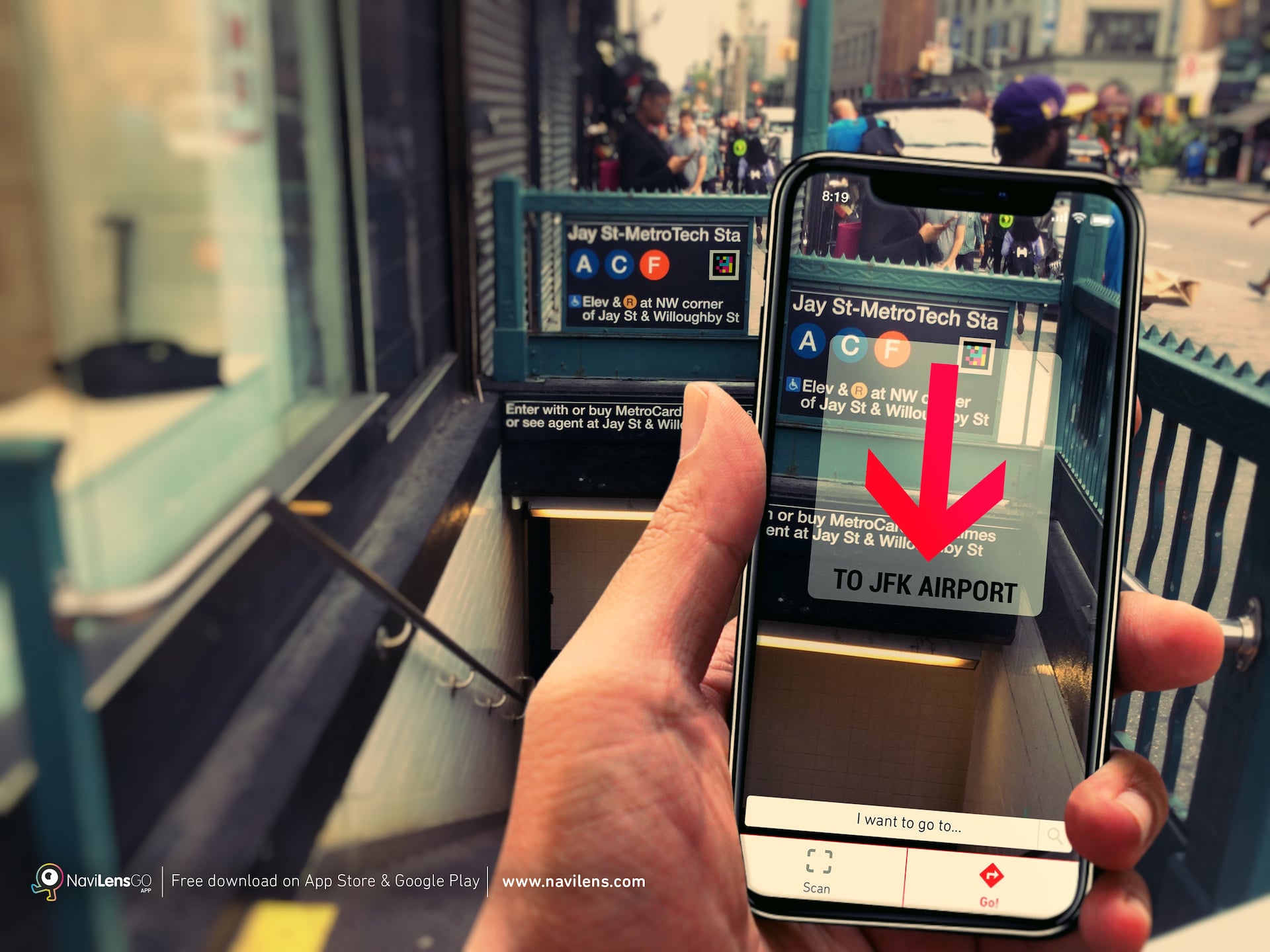 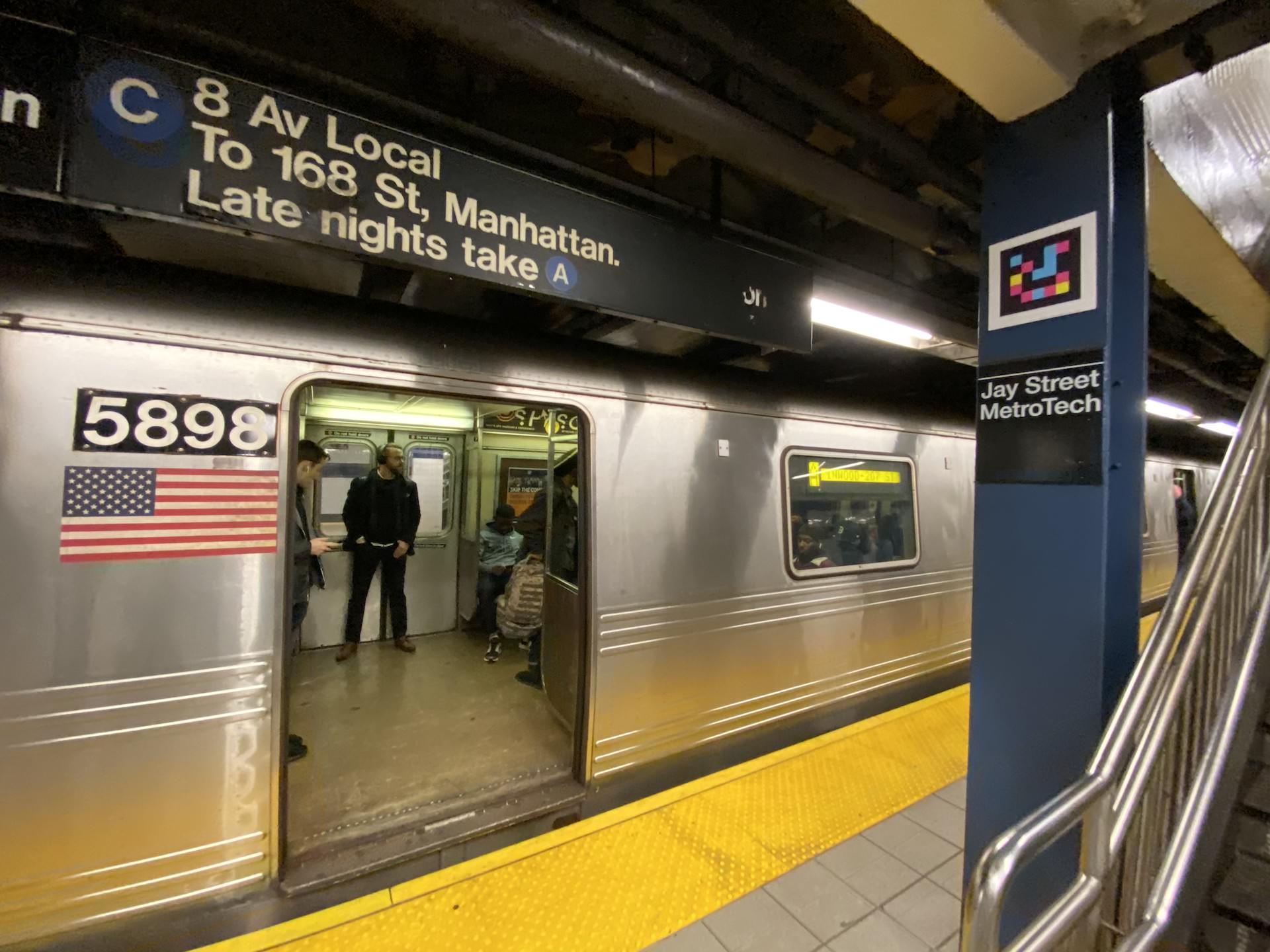 Two Apps Available to interact with this new technology:

The NaviLens App helps visually-impaired users, who can scan the codes without needing to know exactly where they are, offering the same information as the signage very accurately.

You can check by yourself how well the technology works, pointing your phone towards the photos of this email using any NaviLens Apps. 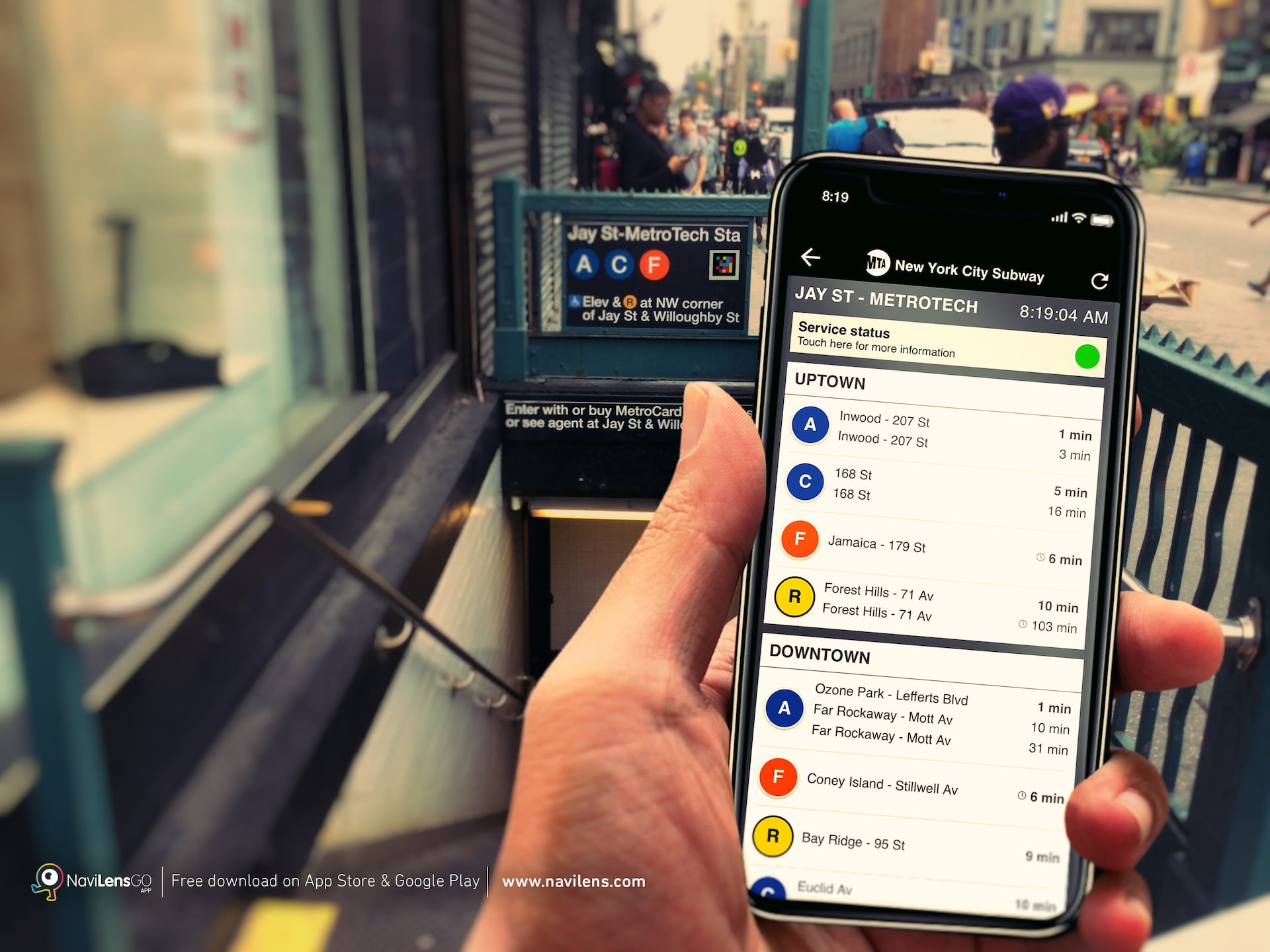 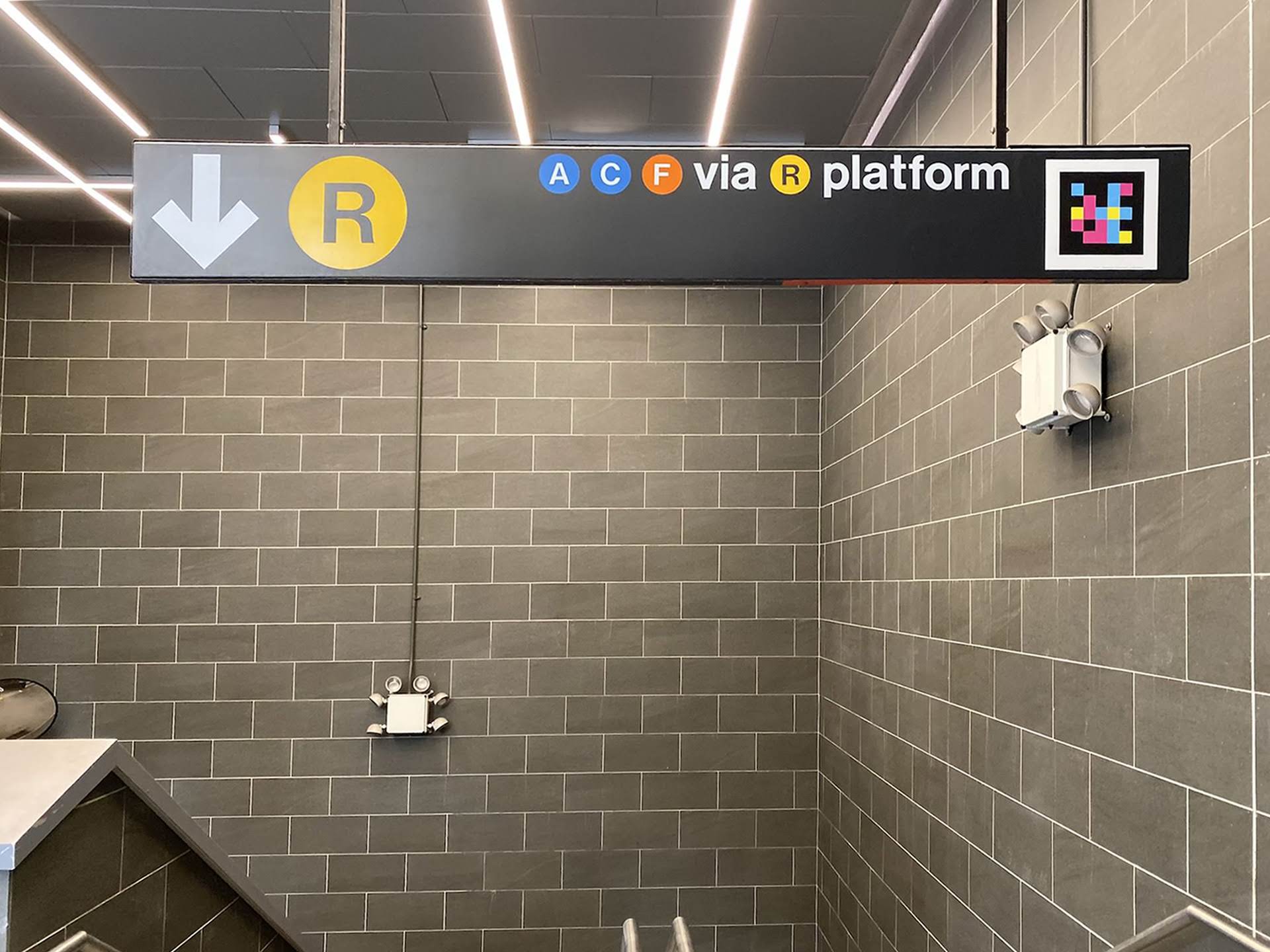 The code is very easy to implement at any space: As easy as emplacement the code over current signage.