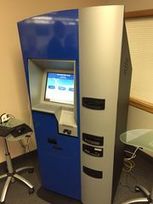 The 30 kiosks placed at DTE payment centers and select Rite Aid pharmacies in locations around Detroit and Michigan accept all forms of payment, including cash. The targeted customer is someone who might not have a credit card or bank account.

Early returns are strong, company executives say. Of the utility’s 200,000 walk-in payment transactions, 25,000 used a DivDat kiosk last month. The use of its kiosks grows between 10% and 15% month-over-month. More than 90% of customers who use the kiosk one time use it again.

For Bierkle, the goal is broader than Michigan.

“We want to eliminate convenience fees nationally,” he said in an interview at the Ferndale headquarters for DivDat, short for “diversified data.” “We don’t think it’s right.” 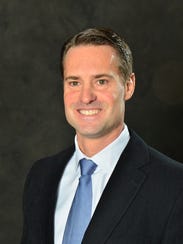 DivDat President and CEO Jason Bierkle, pictured, says that his company has installed 30 cash-accepting kiosks so that DTE Energy customers will have an easier time paying their bills. Dec. 4, 2015 (Photo: DivDat)

He imagines a future of conveniently located kiosks where customers could pay a variety of bills, from water to electric to phone, in one spot without charge. Unlike a payment center, these kiosks would be located in retail stores like Rite Aids that are open on nights and weekends.

A separate trial program inside several area churches also is under way, he said.

The growing use of cash-collecting kiosks in Michigan comes as the Obama administration launched a new initiative last week to boost banking access for millions of Americans who don’t currently have checking or savings accounts.

“For many, it is hard to imagine how it would be possible manage financial affairs without basic products like a checking account or a credit card,” Treasury Secretary Jacob Lew said Tuesday in an announcement about new public-private efforts to reach low-income populations. “But the consequences of exclusion are real, and expanding access to financial services is important at every level of the global economy.”

The recent financial lending crisis and recession have shined a light on the potential dangers for consumers who shell out higher rates and fees for access to last-ditch credit. Millions of Americans don’t have a sufficient enough financial history to receive a credit score, which can unlock traditional forms of lending, according to Lew.

Bierkle says DTE customers already are using the blue-and-gray kiosk in a number of ways its creators did not necessarily anticipate.

Some customers are prepaying their bills to ensure they don’t lose service if times get tight. Others pay a little at various times during the month. 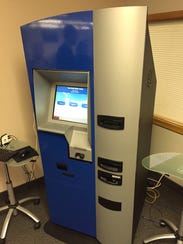 DivDat, a Ferndale, Mich. bill processing firm, teamed up with DTE Energy to put new kiosks to accept cash, credit-card and check payments from customers at the energy company’s payment centers as well as select RiteAid stores in Michigan. The kiosks are designed to aid those who may not have a traditional bank account and want to pay their bills with fees charged by other retailers. Picture taken Nov. 25, 2015. (Photo: Matthew Dolan)

Ted Williams, 61, who lives on Detroit’s east side and works in inventory at Ford, said he uses the kiosks at DTE payment centers when the lines grow too long or at a Rite Aid near the city airport when he stops in to pick up a prescription.

“It’s very easy to use,” Williams said. “I wait until the last minute so I go in to drop off my check.”

Caregivers including parents of children living away from home and adult children of elderly people are also using the system to pay bills remotely for others.

There is also evidence, Bierkle said, that the millennial generation in some cases prefers cash, making the kiosk attractive beyond those who may be without a bank account or credit card.

But there are hurdles left to clear to move the business beyond its early stages.

“We have two challenges,” he said. One is building awareness about the availability of the kiosks and another is reducing concerns that installing kiosks means putting customer-service employees out of work.

For Bierkle, the kiosks are a natural evolution for his family’s business that started in early 1971 as a data processing company. Later, it developed a variety of bill-paying services for companies that progressed from the mail to faxes to the Internet.

DTE sought a partner in 2012 for the kiosk idea and eventually found DivDat. DivDat charges DTE to operate the kiosk and the bill-paying company rents space from local Rite Aids in addition to kiosks stationed in DTE payment centers.

“I consider it wildly successful,” Ronald Gillmore, kiosk program manager for DTE, said in an interview.

The program collects about $3.5 million a month for the utility.

“We’re probably going to look at expanding the network,” Gillmore said. DTE has 2.1 million electric customers and 1.2 million gas customers (and some overlap), the company said.

It can still be a challenge to persuade some older customers to adapt to the new technology, Gillmore said. But once they do, most become repeat customers, he said.