Editors Note:  A little kiosk history for those who might remember. We remember FMA as the premier pop display provider. Big booth at Globalshop every year. It is something about Wisconsin (and proximity to Chicago?).  Not unlike Olea and how it transitioned from tradeshows to kiosks under Frank Jr., Mike Mayer had a bit of the same path… Read More »

Editors Note: This article originally appeared on Gizmodo.  Read full article on Gizmodo Travel Back to 1990 With the Original World Wide Web Browser Screenshot: CERN / Gizmodo The World Wide Web turns 30 this year, and to celebrate three decades of utter chaos and brilliance, CERN developers and designers have created a version of the original WorldWideWeb… Read More »

Is That You, Kiosk? I Hardly Recognize You Remember when your phone was something that you used to talk to other people? It didn’t store numbers, it was attached to a wall, and for some, even had a rotary dial. Now compare that to the phones of today. They record video, they connect you to the entire world,… Read More »

Kiosk Archives kiosks.org was first official kiosk industry site devoted to kiosk developers, manufacturers, deployers and yes, even vendors… Here is where we have links to Archive content. Here are links to earlier content prior to this site: Primenet : this was the original iteration of site which was driven by the comp.infosystems.kiosks Usenet newsgroup that Craig Keefner… Read More »

James Bickers, known to many readers of this site as the former editor for KioskMarketplace.com, died after a long illness on Sept. 29, 2016, in Louisville, Ky. The journalist, who also was a local celebrity for his work in radio, was 45 years old. He is survived by his wife, Nancy, and three school-age children, Miles, Lucy and… Read More »

Kiosk Software Evolution Without those who took the first steps in developing software for kiosks, the industry wouldn’t be enjoying its current dominance in the marketplace. By Richard Slawsky contributor There’s a saying in the business world along the lines of “The pioneers get the arrows.” Nowhere is that more applicable than in the world of kiosk software.… Read More »

From Pymnts.com article QSR Ordering Kiosks Evolved From A 1980s Solution For Out-Of-Stock Shoes As a college student in the 1970s, Murray Lappe heard that his fellow students wanted to promote their organizations through a new medium. During a retreat, the students thought of having a traditional bulletin board, but Lappe had an alternate take: Why not digitize… Read More » 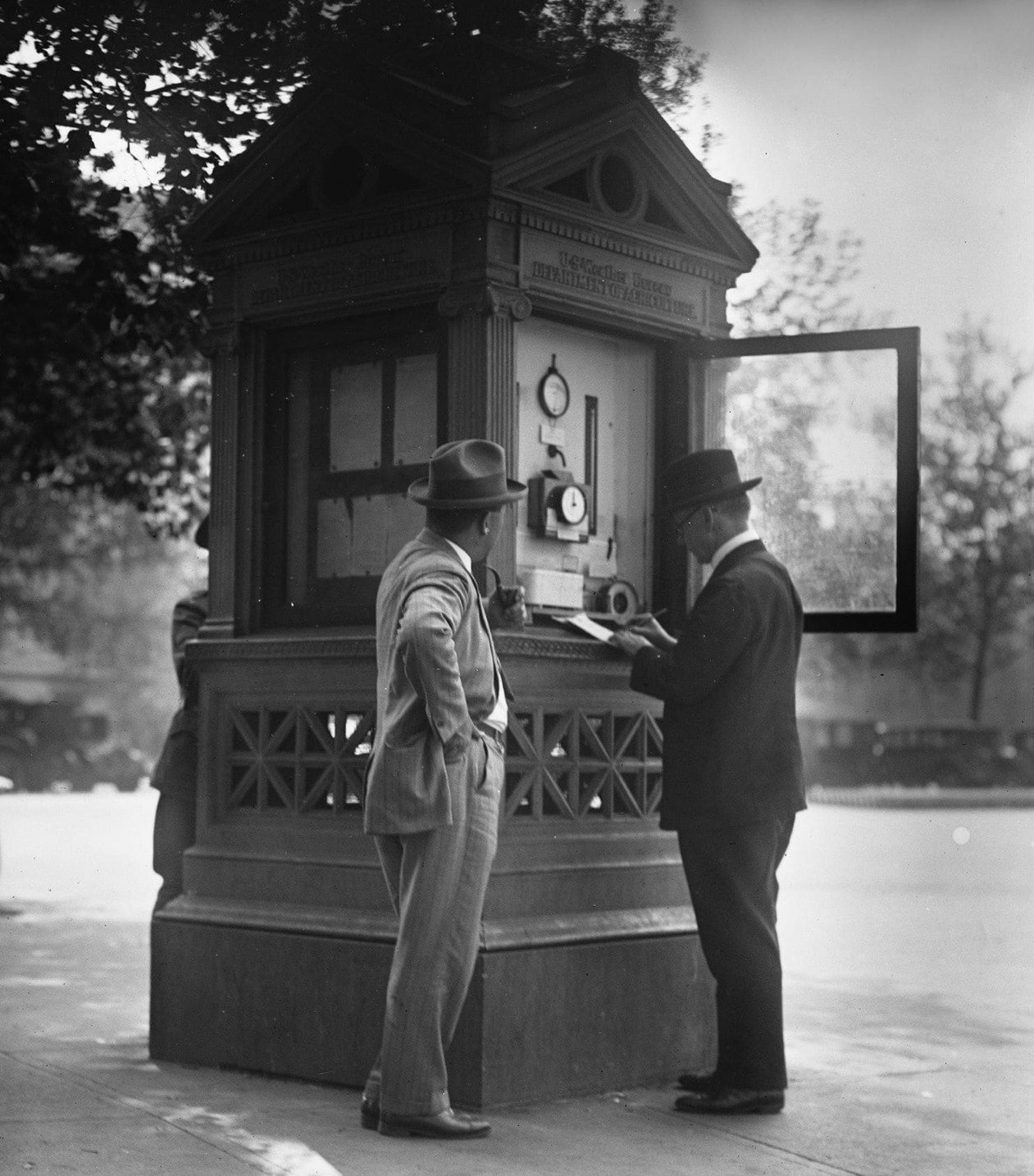 The reliability of weather reports from a kiosk on Pennsylvania Avenue was a hot topic a century ago.

Washington’s weather kiosk was located on Pennsylvania Avenue, near E Street NW. It happened to be directly adjacent to The Washington Post building at the time.

Initially, the kiosk was quite popular with the public, and its reports were frequently cited by the media, particularly The Post. But after a couple of decades passed, Washingtonians began to complain that the kiosk was not reporting accurate temperature readings. The kiosk’s temperature was often 10 degrees warmer than the actual temperature, particularly on sunny afternoons.

Touch Screen Monitor Suppliers July 30, 2020 Another entry for the kiosk history file as longtime touchscreen manufacturer 3M is exiting the business. We read about it first on Sixteen:Nine who heard it from one of the manufacturers. We confirmed with longtime contacts at 3M since then.  We are sure the other self-service technology division are unaffected and… Read More »